Thousands of police officers who have died or been killed in the line of duty were honoured at today’s annual National Police Memorial Day service, held at the Waterfront Hall in Belfast.

Families, friends, colleagues, senior officers, and government officials were welcomed on arrival by a guard of honour formed by representatives from each force in England, Wales, Scotland, Northern Ireland, and uniformed police officers from overseas forces.

The congregation was welcomed by Fionnuala Jay-O’Boyle CBE, Lord Lieutenant of Belfast.

Home Secretary Sajid Javid, gave a reading at the service, and later said: “It was an honour to help pay tribute to the thousands of police officers and staff who have given their lives while serving and protecting us all, including those who died in the First World War.

“The National Police Memorial Service is an important and poignant reminder of the courage shown by the police each and every day.”

The sermon was given by The Right Reverend Dr Charles McMullen, Moderator of the Presbyterian Church in Ireland, before prayers were read by Mr Denis Gunn, father of PC Richard Gunn, Surrey Police; and Pearl Marshall, mother of Constable Michael Frederick Leslie Marshall, Royal Ulster Constabulary.

The Reverend Canon David Wilbraham, National Police Chaplain, led the act of remembrance, during which Sid Mackay, Chair of the Police Roll of Honour, laid a wreath to mark the centenary of the end of the First World War and in memory of the police officers called to service, who lost their lives.

Candles from each of the four nations of the United Kingdom of Great Britain and Northern Ireland, were lit by loved ones to remind us of the undying flame of devotion and commitment, exemplified by those whom we remembered today. Representing Northern Ireland: Joseph Ferguson and Susan Ferguson O’Neill, brother and sister of Constable Michael John Ferguson, RUC, who was murdered by the IRA aged 21 years in 1993.

Representing Wales: Jayne Griffiths, wife of Constable Terence John Davies, Gwent Police, who died aged 34 years, cycling home after a tour of duty when he was hit by a stolen car which failed to stop.

Representing England: Samantha Dixon and Parker Cameron James Dixon, wife and son of PC James Dixon, Thames Valley Police, who was killed aged 39 years, when the police motorcycle he was riding was involved in a road traffic collision.

There was silence in the auditorium as green, blue and red petals of remembrance descended from the gallery before the Last Post was sounded.

Chief Constable of the Police Service of Northern Ireland George Hamilton said: “The National Police Memorial Day is a fitting tribute to police officers everywhere who have died in the course of their duties to protect the public.

“It is important and indeed only right that we take time to pause to remember our colleagues and friends who have given the ultimate sacrifice and lost their lives on duty protecting their communities.

“It is a privilege for the Police Service of Northern Ireland to have been able to welcome so many visitors to Belfast for this year's National Police Memorial Day."

John Apter, Chair of the Police Federation of England and Wales said: ;“National Police Memorial Day is an incredibly important day in the policing calendar, it’s a day where we come together to remember those of our colleagues who paid the ultimate sacrifice. 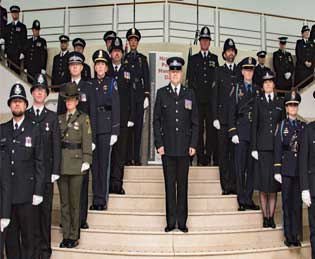 “I hope today brought some comfort to those families who have lost loved ones, it important that they know they will never be alone, we are a policing family and their loves ones will never be forgotten.”

Speaking about the service and its importance, Samantha Dixon, wife of PC James Dixon, Thames Valley Police, said: “I came here today to remember to my husband, PC James Dixon, “Dixie”, who died last December in the line of duty.

"I think it’s a really important thing to do to remember all police officer who have fallen over years, there’s many families, there’s always someone brother, someone sister, dad, mother, and they always leave the family behind. They go to work to protect the public and they don’t ever come home, and it’s us that are left behind.

"It’s a really lovely day and to know that they’re never going to be forgotten and they’ll always be remembered by their immediate family but also by their police family.”