Step Out Stay Out – Rehabilitating prisoners using the beautiful game

The Custodial Review editor Victoria Galligan spoke to Pete Bell, the founder of the Step Out Stay Out programme within prisons. Here, Pete describes how sport turned his life around and set him on a path to help others to rehabilitate…

Pete Bell isn’t just a football coach. He is also a mentor to the inmates he works with and can empathise with them as he has spent time in prison on the other side of the cell door.

From 1990, Pete served time in the Criminal Justice System and says, “I racked up 10 convictions, I was drinking heavily and had been through a custody battle – and then my son passed away. He was two.

“What turned things around for me was when I faced my final sentence five weeks after my son died – I was expecting to get around five years in prison.

“But the judge’s humility towards me meant that he could see that sending me to prison was not right for me.” 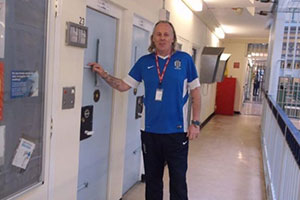 Instead, Pete was given a two-year probation order, which was curtailed after 18 months. For three years, Pete lived in what he describes as “a wilderness”, where he worked briefly in stints but felt he had no true direction and no idea about what the future would hold.

Pete continues, “The turning point came when I visited Nottingham Job Centre. I saw a card for an apprenticeship role at Notts County FC. I was 29 but my education really started then.

“The apprenticeship changed my life. I stopped drinking and started having a great time in my new role.”

From there, Pete amassed a long list of football coaching qualifications and has worked at various clubs. For the last four years, he’s worked for the FA as a grass roots mentor.

In January this year he began a project, Step Out, Stay Out. Pete went into the G4S-run HMP Oakwood, West Midlands, for seven weekly sessions to talk to inmates about what it takes to become a football coach, and guide them to begin coaching others. And he was a hit with staff and prisoners alike.

“I’ve worked in seven or eight prisons so far,” he adds. “I share stories with the inmates and tell them about my experiences.

“I have been employed by HMP Stocken in Rutland and I can actually sign out keys to the prison! I have also been back to the prison I was incarcerated in HMP Lincoln and stood outside my cell, to have my photo taken.”

Pete has been in contact with the Premier League and the Professional Footballers Association about the work he does, talking about the need for such rehabilitation and how football can be the catalyst a person needs to get their life back on track. His local MP Lilian Greenwood has supported him and the FA have backed him through their website.

And Pete has big ideas for the future, adding, “I’m offering now a specific training course for prisoners, based on the FA’s Junior Football Leaders Award. And I’d like to hook up with prisoners on their release, to offer them some employment options and develop a Step Out Stay Out team.”

So what is it about football which makes offenders really engage with Step Out Stay Out? 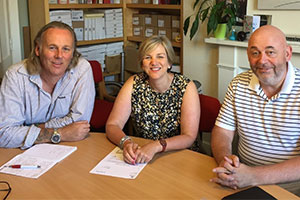 Pete says, “First and foremost it’s my lived experience to be able to say, ‘I’ve sat where you’re sitting,’ that’s most powerful. The huge following everywhere of football within our country makes it easier to engage and create a positive environment in a tough environment.”

It’s clear Pete has come a long way since his stint in prison and he is confident that others can follow where he has led.

“I never get up and think, ‘I’m going to work.’ I love what I do and it’s changing people’s lives,” he says. “The football coaching sessions are all about confidence, team building and standing in front of your peers to lead.”

With so many goals on the horizon, it’s clear to see more success will follow for Pete and the prisoners he works with.

For more information on football coaching, see thefa.com. Follow Pete on Twitter @stepoutstayout to find out more about Step Out Stay Out.