Despite financial cut-backs, the creative side of prison life always seems to win through. Events such as the annual Koestler Awards are evidence of this. So is the sterling work of, for example, Birmingham’s Geese Theatre, whose The Geese Theatre Handbook: Drama with Offenders and People at Risk has been a staple manual for trainers of all kinds since we had the privilege of working on it with them at the start of the millennium.

A similarly prized work is Michael Crowley Behind the Lines:

Creative Writing with Offenders and People at Risk published in 2012. It shows how imaginative approaches to confronting offending behaviour - and imparting skills valuable on the outside - can have a real impact on whether someone returns to custody. Michael is a seasoned advocate for improving literacy in the prison setting. Quite apart from giving presentations at establishments such as Bristol and Erlestoke, he was for six years writer in residence at Lancaster Farms (then a young offender institution). He also helped set up a residency at Arohata Women's Prison in New Zealand in 2014. 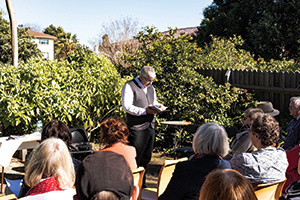 l, focusing on a legendary aspect of crime and punishment: one that now spawns an annual festival, radical by nature, at Tolpuddle in Dorset, the agricultural village from which the first criminally unlawful trade unionists began their fateful voyage to Australia. Other than a few privately-owned dungeons there were few prisons, as we know them, at that time. Offenders might be hung (even for petty crimes), held off-shore or in the River Thames in hulks, or transported to the colonies, meaning the USA until the British were sent packing in the late-1700s.

This is where the Michael Crowley novel kicks in. The Stony Ground is his imagined account (few actual records exist) of Cornish labourer James Ruse, reprieved from the hangman’s noose and transported to Botany Bay on the First Fleet in 1788. Ruse, who is virtually unknown in Britain, is commemorated as a pioneer in his adopted land, Australia, where he has a high school named after him.

He was reputedly the first prisoner ashore, carrying an officer on his back. Eventually pardoned, at Experiment Farm he became Australia’s first settled farmer, the first ex-convict granted land and the first settler to become self-sufficient, bringing him into conflict with indigenous people. Far from his Lancaster Farm roots, Mike has just returned from a month-long tour of New South Wales, reading from his epic story of everyman at events packed by Ruse enthusiasts and descendants, being congratulated by, among others, the best-selling Australian author, Thomas Keneally. By looking to the arts, quite a number of ex-prisoners have become well-known authors, actors or artists, but rarely a member of the team!

To buy the Michael Crowley Behind the lines book please visit www.watersidepress.co.uk